If you look at the cereal section at MOM’s, one cereal in particular sticks out- Clifford Crunch.  It is the only cereal among dozens that has a cartoon character on the box.  Because of the picture of the Big Red Dog, this cereal has been a perennial at our house.  While my wife was shopping with our youngest daughter a few years ago, without ever having tasted it, our toddler went right to it on the shelves and put a box in the cart.

I take a fairly hard stance on this issue.  I think it should be illegal to market to children.

Advertising in and of itself is a rather shady game.  I think most of it is deliberately misleading and, at best, beside the point- focusing more on creating shallow emotional attachments to a product rather than pointing out the merits of the product.  And unfortunately, it works.

This manipulation process begins early when corporations target children.  It’s irresponsible and, in my opinion, unethical.  Let children be children and at least wait until they’re earning their own money before engaging them in the age of consumerism.

A couple of weeks ago, I went to my VP of Grocery and told her that I was about to blog on this topic.  I asked her if she is ready to remove Clifford Crunch from our shelves.  She said, “yes.”  I was pretty upset with Cascadian Farms.

Yes , Clifford Crunch is being discontinued.  Thanks.

Actually, I’m not all that surprised.  There are many environmental and health benefits to the organics food industry.  The fact that it generally steers away from marketing to children is yet another reason to support the industry. 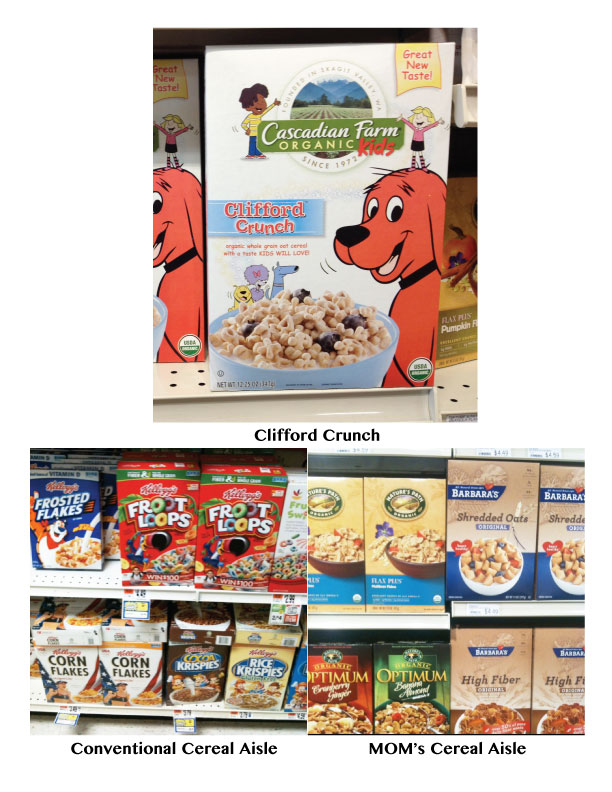